Would you like to switch to the accessible version of this site?

Don't need the accessible version of this site?

NASH ASKS WHAT HAPPENS TO EGO AND SPIRIT WHEN WE DIE?

[Nash]
When you look at a cadaver, the Essence, the Spirit is missing. but so is the ego…
Does the ego go one direction and the Spirit go in another? or are they the same energy, leaving together?

[Marvin]
Nash, Spirit doesn’t go anywhere, it’s our connection to Universalspiritloveintelligence.
It is our soul which withdraws from the body. The body just falls away losing its connection to source.
Ego is just a way of thinking; a habit, a belief in separateness and limitations. It gradually and in phases dissipates.
Thank you Nash.

Lack of effort looks like automatic pilot, the path of least resistance, no initiative, avoidance. Does that make sense Nash?

[Nash]
this manifested at the perfect time and made perfect sense to my current perspective.

ANOTHER QUESTION FROM NASH

[Nash]
When every person is aware of their heath and receiving chiropractic adjustments, what do the humans do next?

if educated mind is quiet, can our innate intelligence communicate 100% with universal intelligence?

the real question: can man channel 100% universal intelligence, here in the material world?

[Marvin]
Okay Nash the answer to the real question is potentially yes but only with ( repeated/constant) effort; the effort must be chosen again in each and every moment, again and again. This is accomplished with our conscious mind through our spirit. What chiropractors call innate intelligence is that portion of Universal Intelligence which is the perfect adapting intelligence of physical life. So innate is already part of Universal but is not the rational part of us. Is that clear?

[Marvin]
The rational part of us is your conscious mind. The part that is thinking about this; asking the questions, getting ideas,being creative,learning.. Our super conscious is our connection to spirit and Universal Intelligence; where inspiration, intuition and creativity come through and from. Innate intelligence is only born within the physical, the perfect, non thinking,adapting intelligence of physical life, limited to just physical life. It is the same in plants, even in a bacteria cell and a cancer cell,dedicated to the adaptation and survival of that physical life form. It does not exist outside the physical!

[Nash]
wow… i need to let that cook thank you my friend. peace and love to you and your family ✌️

[Marvin]
Nash I enjoy mentoring you and remember posing similar questions as I evolved in my awareness.

Your nervous system does NOT respond to objective reality !

What does it respond to?  Answer,your perception of reality.

HEALTHY TIPS FOR A HEALTHY SPINE

The following tips can help you take better care of your spine:

There are two (2) basic approaches or models to healing today.
First, the current prevailing model is based on the study of symptomatic effects and resulting diseases and how to diagnose and treat them, either with the practice of allopathic medicine or the many more natural alternative approaches. This is the reactive model.

The second approach to healing and health is newer and rapidly growing. It is the non-symptom, pro-active model toward healing, wellness and fitness. Instead of reacting to symptoms, you actively do things that enhance your natural healing, immune functions and your fitness.

Now these two (2) approaches are not alternatives; they are complementary. We all need all the non-symptom, pro-active healing and fitness approaches. Many of us also need reactive treatment of symptoms and diseases. We tonal chiropractors recommend the pro-active model but support both models.

WIDESPREAD USE OF CHIROPRACTIC CARE

The increasing interest in alternative and complementary forms of care has caught the attention of several health associations and government agencies. A 1993 study in the New England Journal of Medicine reported that “The estimated number of visits made in 1990 to providers of alternative and complementary healing was greater than the number of visits to all primary medical care nationwide”, and chiropractic was mong the most frequently used non-medical approach.

A followup report published in the Journal of the American Medical Association in 1998 found that the use of non-medical care had increased significantly since the 1990 survey, with “overall prevalence of use increased by 25%,total visits by an estimated 47%, and expenditures on services provided by practitioners of alternative approaches by an estimated 45%”. Of the survey respondents, one in nine (11%) had used chiropractic care within the previous year.

Tonal Chiropractic – A New Approach by Marvin Talsky, D.C.
Enhancing overall healing and immune functions, enhancing work performance, enhancing athletic performance and performing art ability; these along with a heightened sense of well being are the goals of the new Tonal Chiropractic. Dr. Marvin A. Talsky, a master chiropractor in full time practice on the north shore since 1965, in 1995 co-founded and developed the first new technique of Chiropractic’s second century, Torque Release Technique. As of 2001, he developed Talsky Tonal Chiropractic. Some of the refinements of the new tonal work are:

The primary intent of this work is to progressively reduce tension and blockages in the entire spinal system, to release trapped unresolved patterns in the body/mind, and to facilitate reintegration of the nervous system, allowing a greater expression of one’s healing and performance capabilities.

Dr. Talsky has been teaching this new work to chiropractors all over the U.S.A. and Canada in postgraduate seminars since 1995. He has a full time practice in northwest Evanston, and is available to share introductory lectures and demonstrations for your organization. He is happy to answer any questions about his practice and can be reached at:

“TONAL CHIROPRACTIC”: AN ALTERNATIVE TO WHAT?

It is vital to know that the body is never in a static state; health is not a static state of being. Each of us is either in the process of healing and developmental growth or in the process of developing health problems and/or disease. It is our belief, through our years of practice and experience, that , we don’t have to accept most chronic ailments and disabilities as a normal part of aging.

Although many health problems improve with tonal chiropractic care, the purpose of this care is to facilitate normalizing of nerve system function, freeing the body to adapt more, recover more, and to increase performance capabilities in work, athletics and the arts. So then the choice is yours. Do nothing until symptoms develop that interfere with your life. The other option is to take this opportunity- to pro-actively enhance your healing and immune functions and increase your performance capabilities now. This is exactly what many people have been looking for. We encourage you to come for care.

THE UNIQUENESS OF CHIROPRACTIC

Chiropractic is the science of detecting and analyzing spinal subluxations and the art of progressively correcting them by spinal adjustments. Spinal subluxations are distortions of spinal structure and motion that cause stress to your spinal cord and nervous system. Subluxations may be caused by emotional stress, chemical stress, poor posture, strenuous exercise, injuries, auto accidents, sports, slips or falls, and in some cases, the birthing process itself.

Chiropractic adjustments are a process of correcting subluxations by hand or instrument and restoring better healing ability, immune function, and performance potential.

A BRIEF HISTORY OF CHIROPRACTIC

The first recorded chiropractic adjustment was performed on September 18, 1895, by Dr. Daniel David Palmer, a Canadian-born teacher and healer. Dr. Palmer was, at the time, studying the causes of disease. His patient was Harvey Lillard, a janitor working in the same building as Dr. Palmer in Davenport, Iowa. Mr. Lillard, who had complained of hearing problems for over 17 years, allowed Dr. Palmer to examine his spine. Dr. Palmer discovered a “lump” on Mr. Lillard’s back and suspected that a vertebra might be out of place, which he then repositioned the vertebra with a gentle thrust. After several such adjustments much of Mr. Lillard’s hearing was restored. 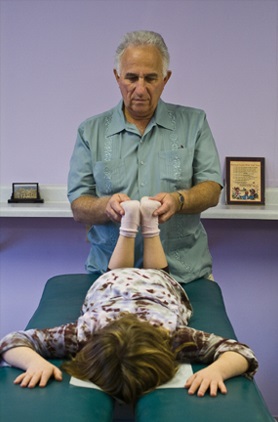 Simply put, Tonal Chiropractic is a generic term referring to an expanded and more encompassing perspective of chiropractic analysis and application. It takes its descriptive name from tone, here defined as “the expression of vibratory frequencies through matter”. Applied to the spinal cord; “tension alters tone”, i.e., spinal subluxations tend to increase tension. As tension is increased, the range of vibratory frequencies that can be expressed is decreased. So tonal chiropractic considers spinal cord tension over spinal cord pressure.

Tone was first described in chiropractic by D.D. Palmer who discovered and founded chiropractic. Spinal cord tension was described and distinguished from spinal cord pressure by R.W. Stephenson, D.C. in the “Chiropractic Text Book”, first published in 1927.

Tonal chiropractic approaches use a more vitalistic, physiological and moment-to-moment analysis over the more mechanically based, often x-ray dependent analysis. The adjustments tend to be low force, more facilitating and empowering to the patient/practice member in a tonal approach. The corrective and healing process tends to continue on an on-going basis rather than reaching a point of maintenance. 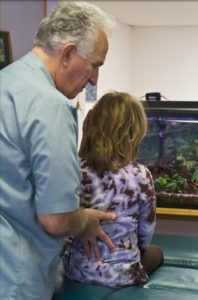 Talsky Tonal Chiropractic (TTC) is the “Next Generation”, built on the basic structure I developed for Torque Release Technique but expanded with deeper, more complete explanations, with newer discoveries and more refined technique applications. TTC enhances and empowers the individual D.C. to bring personal experiences and gifts to the tonal model.

Find Out When We Are Open